THESE ARE THE TRANSCRIPTS OF TWO INTERVIEWS with Lillian Naimark. The first interview was a short one conducted by Eleanor O’Bryon over the telephone in October 1990.  (Eleanor O’Bryon was the first researcher hired by Paul Gass when he started his family history project.)

The second interview was conducted in person by Judy Shapiro, the daughter of Ida Gass Ullian, who was one of Samuel Gass’s daughter’s. In the second interview, Lillian was joined by people identified as “Corkie, Harry, Robert, Linda & Arnold Feldman.” Presumably, Corkie is Lillian Naimark’s daughter Corrine Glanz, and Harry is Corrine’s husband, Harry Glanz. Robert is probably the son of Henry and Becky Naimark. Arnold Feldman is one of the sons of Mary (neé Naimark) and Irving Feldman. Arnold’s wife is Linda Cuthbert. Judy is a second cousin of Corkie, Robert, and Arnold. The date of the second interview was given as 11/23/90 on the transcript of the original transcript, but in an edited version it was recorded as December 1990. 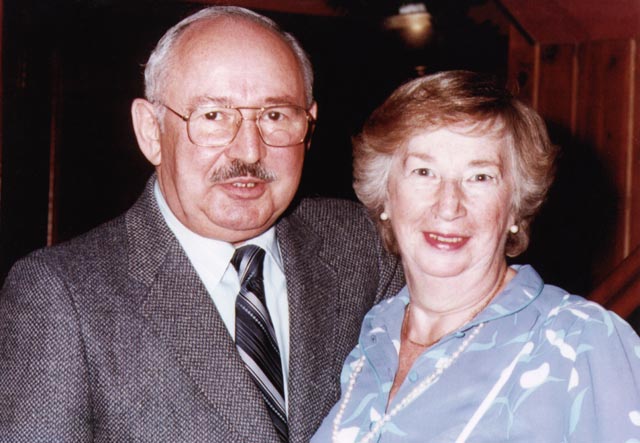 LILLIAN NAIMARK: Jacob Naimark  had been over here [America] several times before he brought Menya and the whole family over. He had visited and done a little working in Chelsea, and he decided he could not succeed here and he did not want to move to America. He wanted to stay in Poland because he was a man who was not educated. He didn’t read or speak English, and he didn’t know to do accounts. He had been in business as a wool dyer in Poland and had come to the conclusion that he would not to be able to compete here, that he would always be a nobody in America. And so he didn’t want to move.

The reason they [finally] come was because when the pogroms that were occurring in Russia and Poland began, and when it was clear that war was coming, Menya said “If you don’t go, I’m going without you and I’m taking the kids,” because she was so afraid for her children’s lives. And so he came, but he didn’t want to.

JUDY: Do your remember visiting Lena and Sam Gass in Chelsea?

LILLIAN: I’m not saying that we didn’t go see her, but they weren’t very warm people.

JUDY: Did you ever have a meal in Bubbe’s house?

LILLIAN:  I never had an apple.

HARRY: We have a different story, but from what I remember, she passed away about sixty-five. I know we went there, we were only at that time married four years.

[Ed note: It is not clear to me whom Lillian is speaking about in the following section. Lillian married into the Naimark family, so references to her grandmother, mother, father, and grandfather are out of context. The first paragraph would make sense if she were referring to Judy’s grandmother Lena instead of “my grandmother”, and if she meant “Menya” instead of “my mother.” “Her brothers” clearly refers to Menya and “my grandfather” is Jacob Naimark.]

LILLIAN:  Whenever we went to visit my grandmother it was always because my mother insisted. My father had no interest in going at all. And that’s the truth.

Her brothers were everything to her because they represented a good life. She was unhappy with my grandfather.

So far as I knew she had wanted to come over here for a long time because the pogroms were starting, and he didn’t want to leave because he knew what was ahead of them. But he did come and he stayed here for two years at one time himself and then he went back. And then after a while the pogroms started up again, so she said she’s coming to Canada, or Chile or wherever her brothers could her in. And she was coming here whether he wanted to or not because she was going to save the children. And that was how they come over.

All of the children, all eight, were born in the old country. They came here with nothing. Her brothers gave her clothing for the children, they rented a place for her. I think they rented rooms for a family of eight. When they got here they thought they were coming to something and they come to nothing. There was nobody in Montreal for them but this is where they got the papers to come to. She wanted so desperately to come and the best she could do at first was get papers to Chile. Well, she didn’t want to go to Chile, Montreal was closer to Boston than any place else, and that’s why they settled here.

He sold newspapers. When they first come across here he had a newspaper stand and he got the boys to sell newspapers. And then the boys didn’t want to sell newspapers any more. They were growing up, going to school. So her brothers must have given him money, because he went into the brush business. When Sam [Naimark] came back from Israel, and Norman wasn’t working, the two boys and the father went into the brush business. And before that he [Jacob] was in Dependable Slippers, worked himself up to a very, very big business, but he didn’t know the ways here. Didn’t want to keep books. When Sam wanted him to keep books he didn’t want to keep books. It was a waste of time. He was used to the European way of doing business. He was a farmer in Europe, he had a mill, he wasn’t a businessman. So he didn’t make a success of any of the businesses they went into here.

And yet Sam [Gass, the brother of Menya] made something out of himself. He did very well for himself.

JUDY: What did all of the [Naimark] brothers and sisters do?

LILLIAN:  Sarah moved to the states and her husband was a furrier and she worked in a dress factory. Aaron worked himself up to where he had a very nice laundry business. But he did just about everything. He was a bookie at one time, he was everything at one time. They talked Norman into being in with him, Eddie, Mary. Dora also went into a dress factory, worked in a dress factory. Mary never worked. Her husband Irving was in dry cleaning. Now Arnie’s running it. The two younger boys, Eddie and Henry, sort of learned a very big business with Aaron, Supreme Lace, lingerie. They made a big success.

JUDY: Tell me more about Menya and Jacob.

[Ed note: When Lillian refers to “my parents” in the next section. she is probably referring to her in-laws, Menya and Jacob Naimark.]

LILLIAN:  The story was, my parents had rented a house up north and we had had help, and Stephen was just born, this was 1948, and Dora got married. So Menya came, Aaron and Anne brought her, and I see the valise so I know she’s planning to stay for a little while. Well, she stayed for a week. So I said OK. And she was there for the summer. And when we came back she said she wasn’t going back to Grandpa [Jacob]. And she took her own apartment.

LILLIAN:  Norman and I met in the summertime. It was a summer romance. 1936. I was engaged for two years. The following week Norman said he was going to come back for the weekend. I didn’t see him around, so I made the great mistake of asking Mary, because she was up north, where her brother was. Well, did she call me down.

HARRY:  She was a very big troublemaker.

LILLIAN:  I was very happy with Norman. We were in love. We weren’t millionaires, but we were happy in what we had, and my children turned out well, so I have no complaints.

CORKIE:  My mother [Lillian Naimark] was a very big volunteer worker in cancer research. We got married in ’62, had our first daughter in ’63 and our second in ‘66.

Harry Glanz, [Corkie’s husband], he always had his own business.

LILLIAN: Louis [Gass] was a cousin to your late grandfather Samuel [Gass]. He had a daughter Marsha. Louis’ wife Fanny was killed by a truck a long time ago. All I know about Louis is he used to come to your grandfather’s house and bring him food and look after him. Because your grandfather lived all by himself in that big house and even if they tried to get him help, nobody was up to his liking and his expectations. [This was after Sam’s wife Lena died.]

ARNOLD: Jacob [his grandfather] I remember as always an old man, possibly because he was bald, and so somehow I remember him as being religious. I know he lived a block away from a Spanish and Portuguese synagogue. Drinking tea from a glass I remember. And either I remember him as coming from shul or going to. I don’t remember going out with them together very often. I remember visiting on Sundays, or perhaps after Bar Mitzvah lessons occasionally. It was a very small apartment and we were a lot of grandchildren.

ROBERT: She [Menya] used to come to our house for the holidays, Friday nights.

ARNOLD: I remember my grandmother [Menya] more. She was a very kind person, nice person. I don’t know what year they separated but in 1954 they were both at my Bar Mitzvah. Obviously when he died he had Alzheimer’s, and they didn’t diagnose it at that time. It seems to be in the family. My mother, and father, my aunt Sarah, that’s it. Dora and Aaron it was leukemia. My grandmother I remember had a heart attack. I remember visiting her in Maimonides, which is a [nursing] home. They were trying to get her into the home, and when they called her to tell her that there was room for her, she wanted to go because she had friends there and she couldn’t live alone. But she had a heart attack. I remember talking to her after her heart attack, and she was telling me she had a good life. It was a hard life but she was happy, and she recalled a story to me about when she was much younger…

She was in bed, quite sick, and I guess she had high fever, and she said she had a vision she was dying. And God came to her and said, “What are you doing dying? You have eight children, you’re not ready.”

And she got better. She spoke English very well. She taught me a Hebrew prayer to say before I go to bed at night.

CORKIE:  He [Jacob] died in 1957. They used call him Yankel. For a while he lived with a rabbi. My father used to visit him regularly. He had family in New York.

JUDY: Your aunt Sarah told me that for many years Minnie and Jacob lived together as a married couple but that they really were separate. They had no contact, no communication.

LILLIAN: Mary got married to Irving the end of October, 1939. She was wearing her blue velvet dress with a blue pillbox hat, and she had her shoes cut down so she wouldn’t be taller than Irving.

HARRY: They all got married at the Carmasil. They were friends of theirs, and that was a Jewish steak house.

LILLIAN:  Mary, when she first got married, lived with her mother in a little back room. And I lived with my parents. And then we went looking for apartments, and we both couldn’t afford very much, so we decided that we would rent a two-bedroom apartment and each have our own room and we’d live together. Which we did. We lived together for about a year and a half, until we started thinking of a family. And one of the best times of our life was when Mary had laryngitis and she couldn’t talk.

Corrine and Arnie were very close because the kids were always together.